I have Fender Champ silverface in my stock. It has been modified already by myself.

MOD = Vibrato circuit was disabled.  Grill cloth was replaced with gold one.

MOD = AC Inlet has been added. Speaker Jack has been changed to phone from RCA and relocated on the back panel.
MOD = CT has been added instead of decoupling resistor 1K ohm 1W.
The power amp stage is still single ended 6V6 though.
One preamp tube has been added for more gain stage.

All  mods were for experimental purposes to determine the sound difference.
And the data was captured. The experiment has been done.

So, it's the time to restore the amplifier.

Restoring back to the original Champ is not so interesting or enjoyable.

Well, PT of the Champ and the Princeton is the same.
The same voltage and the same current value.

So if I replace the OT with one for Pushpull and if I add a US tube socket for another 6V6, I will be able to convert the Champ to Princeton !!! Need the circuit modification too of course.
decided to restore my scratched Champ to Princeton amp.

When the experiment has been performed Original speaker was replaced with Jensen 8" ceramic.

During the experiment, it was replaced with Fender replacement 8" speaker.
It is probably made by Eminence.

This time, replaced with the 10" Celestion. Speaker hole is the same as 8", but added extra screw holes for mounting 10 inch speaker.

Step 2.  Transformer and other elements

Made the original foot switch for vibrato on/off.
Box itself is made of  alminum to get lighter weight.
In order to lower the noise, put extra metal, brass and cupper for emphasizing zero volt grounding level of the switch box.

Outer facade is The Fender Vibro Champ silverface and the circuit is modified to Princeton amp.


Will post the sound clip of the amplifier soon.

Hope you're going to have the nicest guitar playing life. Thank you. 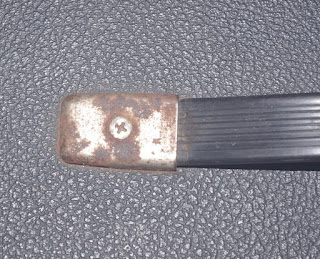